Human sexuality is how people experience the erotic and express themselves as sexual beings. Human sexuality plays a major role in everyone’s life. Regardless, whether we are young or old, man or woman, American or Japanese, it is an integral part of what we do and who we are. There has been much done by way of research and scholarly writing examining human sexuality (e.g., Abramson & Pinkerton, 1995; Beach, 1976; Diamond, 1997; Reinisch et al., 1990; Stalcup, 1995; Tiefer, 1995). This paper will explore the topic of human sexuality as a motivation. Of course, there are many emotions associated with human sexuality, but the primary aim of this particular paper will be a general overview of sexuality with special attention to the various perspectives, including the: 1) biological perspective, 2) cognitive perspective, and 3) learning perspective. All the while, the lens through which we summarize these perspectives will be with the understanding that human sexual behavior is a motivation. Next to sleeping and eating, it seems that it is one of the most important drives we have to deal with as humans. That is, it takes up so much of our time in thought and behavior that it sometimes seems that every facet of our life revolves around this to a certain extent.

Human sexual behavior is different from the sexual behavior of other animals, in that, it seems to be governed by a variety and interplay of different factors. That is, while «lower» animals or species are driven by a «force» to reproduce and therefore partake in sexual behavior, humans (and some other species such as bonobos) are not sexually active just for the sake of reproduction, rather, there are a variety of complex factors that lead people to have sex.

The term can also cover cultural, political, legal and philosophical aspects. It may also refer to issues of morality, ethics, theology, spirituality or religion and how they relate to all things sexual.

Recent studies on human sexuality have highlighted that sexual aspects are of major importance in building up personal identity and in the social evolution of individuals:[1]

Deleuze and Guattari, in their 1972 Anti-Oedipus, discuss how sexuality is a powerful force that invests all social activities:[2]

The biological aspects of human sexuality deal with human reproduction and the physical means with which to carry it out. They also deal with the influence of biological factors on other aspects of sexuality, such as organic and neurological responses,[3] heredity, hormonal issues, gender issues and sexual dysfunction.[4]

Apart from the possibility of its resulting in successful pregnancy and childbirth, sex has a wide range of health benefits including relief from stress, more immunity through increased immunoglobulin A, reduced risk of heart attack and of prostate cancer, and sounder sleep.[5]

Sexuality in humans generates profound emotional and psychological responses. Some theorists identify sexuality as the central source of human personality.[6]

Psychological studies of sexuality focus on psychological influences that affect sexual behavior and experiences.[4] Early psychological analyses were carried out by Sigmund Freud, who believed in a psychoanalytic approach. He also conjectured the concepts of erogenous zones, psychosexual development, and the Oedipus complex, among others.[7]

Behavior theorists such as John B. Watson and B. F. Skinner examine the actions and consequences and their ramifications. These theorists would, for example, study a child who is punished for sexual exploration and see if they grow up to associate negative feelings with sex in general.[8] Social-learning theorists use similar concepts, but focus on cognitive activity and modeling.

Gender identity is a person’s own sense of identification as female, male, both, neither, or somewhere in between. The social construction of gender has been discussed by a wide variety of scholars, Judith Butler notable among them. Recent contributions consider the influence of feminist theory and courtship research.[9][10]

Sexual attraction is an important aspect of the sexuality of the person being observed, as well as of the person observing. Each person determines the qualities that they find attractive, which vary from person to person. A person’s sexual orientation has a significant influence on which qualities they will find attractive. The qualities that people can find sexually attractive may depend on the physical quality, including both looks and movements of a person but can also be influenced by voice or smell as well as by individual preferences resulting from a variety of genetic, psychological, and cultural factors.

The Flirt, by Eugene de Blaas

People both consciously and subconsciously seek to attract others with whom they can form deeper relationships. This may be for companionship, for procreation, for an intimate relationship, besides other possible purposes. This involves interactive processes whereby people find and attract potential partners, and maintain a relationship. These processes, which involve attracting a partner and maintaining sexual interest, can include:

Most world religions have sought to address the moral issues that arise from people’s sexuality in society and in human interactions. Each major religion has developed moral codes covering issues of sexuality, morality, ethics etc., which have sought to guide people’s sexual activities and practices. However, the impact of religious teaching has at times been limited. For example, despite most religions disapproving extramarital sexual relations, it has always been practiced, to a large extent due to lack of firm foundation and conviction in one’s belief.

In the past, children were often assumed not to have sexuality until later development. Sigmund Freud was one of the first researchers to take child sexuality seriously. While his ideas, such as psychosexual development and the Oedipus conflict, have been rejected or labeled obsolete, acknowledging the existence of child sexuality was a milestone.[14] Alfred Kinsey also examined child sexuality in his Kinsey Reports. Children are naturally curious about their bodies and sexual functions. For example, they wonder where babies come from, they notice anatomical differences between males and females, and many engage in genital play (often mistaken for masturbation). Child sex play includes exhibiting or inspecting the genitals. Many children take part in some sex play, typically with siblings or friends.[14]

Changes in sexual behavior occur with age and while humans in late adulthood may be impaired by infirmity, relationship needs such as closeness and sensuality remain. Aging produces changes in sexual performance. Men are more likely to experience these changes than women. For men, orgasms become less frequent and usually need more direct stimulation to produce an erection. One out of four men, ages 65 to 80, had severe problems getting or keeping erections and this percentage increased with men over 80 years of age. Yet, the use of drugs to treat erectile dysfunction increases the expectations of older adults to have sex. Despite medical complications and opinions that people in late adulthood should be asexual, many older adults continue to engage in sexual intercourse. The results of a recent interview study involving 3,000 adults 57 to 85 years of age have shown that health plays a role in the level of older adults' sexual activity. The percentage of sexually active older adults is higher for those that are in good health than those in poor health. Older women may be less sexually active due to outliving their partners or men’s tendency to marry younger women. While older adults engage in sexual activity, intimacy and companionship tend to be more important than sex.[14] 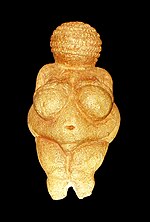 The prehistoric Venus of Willendorf

Art and artifacts from past eras help to portray human perception of sexuality of the time.[4]

Many of the ancient civilisations provide evidence of developments in sexuality. In particular:

In contemporary academia, sexuality is studied in the fields of sexology and gender and sexuality studies, among many other fields.

Sexology, the study of sexual interests, behavior, and function, covers sexual development and sexual relationships including sexual intercourse. It also documents the sexualities of groups such as the disabled, children, and the elderly.[15]

Alfred Kinsey became interested in the different forms of sexual practices around 1933 when he developed the Kinsey Scale, which ranges from 0 to 6, where 0 is exclusively heterosexual and 6 is exclusively homosexual. His Kinsey Reports starting with the publication of Sexual Behavior in the Human Male in 1948 and Sexual Behavior in the Human Female in 1953 contributed to the sexual revolution of the 1960s.